The Case Against Processed Vegetable Oils

Dr. Paul Saladino is the author of “The Carnivore Code.” I’ve previously interviewed him about the carnivore diet and the impact of metabolic health on COVID-19 outcomes. The video1 above features Saladino on a recent episode of the Joe Rogan podcast.

It’s a three-hour conversation, but my focus here is on Saladino’s viewpoints on omega-6 seed oils, and the surprising fact that conventional chicken and pork are significant stealth sources of oxidized omega-6 fats that can contribute to ill health by impairing vital mitochondrial signaling.

Vegetable Oils Are Responsible for Epidemic of Ill Health

In recent years, it’s become increasingly clear that one of the most damaging components in our modern diet is processed vegetable oils, as they contain excessive amounts of oxidized omega-6 linoleic acid, a polyunsaturated fat (PUFA). The biological damage they cause is even worse than that caused by refined sugar and high fructose corn syrup.

According to ophthalmologist Dr. Chris Knobbe, who has researched the matter extensively, virtually all chronic metabolic and degenerative diseases, including age-related macular degeneration, are primarily caused by a preponderance of industrial vegetable oils in the diet.

Replacing dangerous oils with healthy fats can go a long way toward boosting your health and reducing your risk of chronic disease.

The reason for this is because these oils trigger mitochondrial dysfunction that then drives the disease process, and several studies2,3,4,5,6,7,8 have demonstrated the truth of this. The good news is that simply replacing dangerous oils with healthy saturated fats can go a long way toward boosting your health and reducing your risk of chronic disease.

Unfortunately, many health authorities have insisted — and still insist — omega-6-rich oils like soybean, corn and canola oil are healthier than saturated animal fats such as butter and lard, and this myth has been a tough one to dismantle, despite the evidence against it.

There are many reasons to avoid or eliminate industrially processed seed oils from your diet. As mentioned, vegetable oils are a concentrated source of omega-6 linoleic acid, which can lead to a severe imbalance between the omega-6 to omega-3 ratio in your diet.

In fact, I’ve found it is extremely difficult to correct this imbalance simply by taking more omega-3. In fact, excess omega-3 can also contribute to ill health. Your first and most important step is to cut down on the omega-6s, or else you’re always going to be nutritionally lopsided.

Even organic, biodynamic olive oil can shift your ratio in the wrong direction, as olive oil is also a source of omega-6 linoleic acid. If, like me, you’re in the habit of eating olive oil, you may want to limit your intake to 1 tablespoon per day or less. The problem, really, is twofold:

Most people get far too much omega-6 and too little omega-3, thus ending up with a lopsided ratio, and this ratio is what impacts health. Ideally, this ratio would be close to 1-to-1 Most of the omega-6 people eat has been damaged and oxidized through processing

Then there’s the issue of direct toxicity from pesticides and herbicides. Most of the vegetable oils produced today — especially canola, corn and soy — are made from genetically engineered (GE) crops, and are therefore a significant source of toxic glyphosate exposure.

Damaging the endothelium (the cells lining your blood vessels) and causing an increase in penetration of LDL and very low-density lipoprotein (VLDL) particles into the subendothelium. In other words, these oils get integrated in your cell and mitochondrial membranes, and once these membranes are impaired, it sets the stage for all sorts of health problems.

As discussed in my July 2020 interview with Knobbe, the PUFAs from vegetable oils, seed oils and trans fats are primarily stored in your fat cells, opposed to being used for fuel, and have a half-life of 600 to 680 days.11 They also get incorporated into tissues, including your heart and brain.

One result of this could be memory impairment and increased risk of Alzheimer’s disease, which is exactly what they found with canola oil.12 As reported in one 2017 study:13

“Our findings do not support a beneficial effect of chronic canola oil consumption on two important aspects of AD pathophysiology which includes memory impairments as well as synaptic integrity. While more studies are needed, our data do not justify the current trend aimed at replacing olive oil with canola oil.”

Damaging your mitochondria and DNA by making your cell membranes more permeable, allowing things to enter that shouldn’t.

Inhibiting cardiolipin, an important component of the inner membrane of your mitochondria that needs to be saturated in the omega-3 fat DHA to function properly.

Cardiolipin can be likened to a cellular alarm system that triggers apoptosis (cell death) by signaling caspase-3 when something goes wrong with the cell. If the cardiolipin is not saturated with DHA, it cannot signal caspase-3, and hence apoptosis does not occur. As a result, dysfunctional cells are allowed to continue to grow, which can turn into a cancerous cell.

Inhibiting the removal of senescent cells, i.e., aged, damaged or crippled cells that have lost the ability to reproduce and produce inflammatory cytokines that rapidly accelerate disease and aging.

Exposing you to toxic 4-hydroxynonenal (4HNE), which forms during the processing of most vegetable oils, even if the oil is obtained from organic crops — 4HNE is highly toxic, especially to your gut bacteria, and consumption of 4HNE has been correlated with having an obesogenic balance of gut flora. It also causes DNA damage and instigates free radical cascades that damage your mitochondrial membranes.16

The Molecular Biology of PUFAs

If you want to go deep and geek out on the molecular biology of what is going on with excessive linoleic acid (LA) intake, then I strongly advise watching the video above.

Saladino interviews veterinarian Peter Dobromylskyj, who maintains the Hyperlipid Blog.17 In it, they describe in great detail how eating these seed oils and other foods high in LA, like chicken and pork, destroy mitochondrial signaling in the adipocyte and disrupt your metabolic functioning.

One key point from this Dobromylskyj interview is the explanation of how PUFAs break your metabolic mechanism and contribute to obesity. As explained by Saladino, as he reviews a study on this topic:

“Let’s look at what happens when you give humans a bunch of polyunsaturated fats … You are supposed to be insulin resistant in ketosis. That’s how your body partitions glucose to the cells that need it.

And here you have a ketogenic diet based on … canola oil, safflower oil or soybean oil, and you see people remain insulin sensitive when they’re in ketosis. This is clear evidence that polyunsaturated fats are breaking your metabolism. Glucose is lower because it’s going into your cells; it’s making bigger cells. You’re getting fat.”

For clarity, does this mean a ketogenic diet, meaning a diet high in healthy fats and low in non-vegetable carbs, is fattening? No. The take-home message here is that a proper ketogenic diet must be based on healthy saturated fats, not destructive vegetable seed oils that are loaded with LA.

Eating a high-fat diet, when the fats are primarily LA from processed vegetable and seed oils, is far worse than eating a chronic high-carb diet. The type of fat is of crucial importance, as it impacts your mitochondrial, cellular and metabolic functioning.

Fats like LA can persist in your cell membranes for months to years, continuing to wreak havoc with your metabolism the entire time, while the sugar is quickly metabolized.

Aside from that, this also helps explain why processed foods are so fattening. It’s not just that they’re loaded with added sugars. They’re also loaded with LA that breaks your metabolic machinery and promotes fat accumulation and inflammation.

To learn more about the ins and outs of dietary fats, pick up a copy of my book “Superfuel: Ketogenic Keys to Unlock the Secrets of Good Fats, Bad Fats, and Great Health,” cowritten with James DiNicolantonio, Pharm.D., which gives more in-depth specifics on how to discriminate between healthy and harmful dietary fats. Dr. Catherine Shanahan’s list of good and bad cooking oils and fats is also useful. 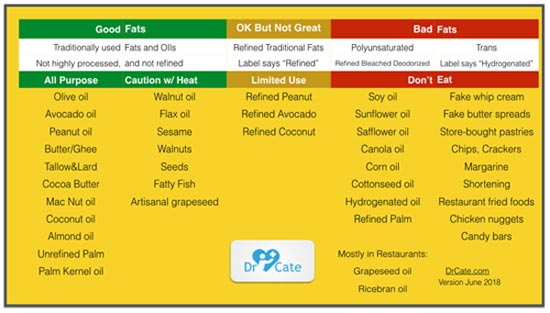 As explained by Saladino in the featured Rogan interview, aside from processed foods (which are loaded with vegetable oils) and vegetable cooking oils, there are also two common stealth sources of harmful PUFAs in the modern diet, namely conventionally farmed chicken and pork.

Long thought of as a healthier type of meat, primarily because it’s leaner than red meat, the problem with conventional chicken (and pork) is that the animals are fed corn — typically GE varieties that are farmed with glyphosate.

And what happens when animals are fed corn? The meat becomes high in omega-6 linoleic acid, as corn is high in this type of fat.18 So, as Saladino points out, high chicken consumption actually adds to your vegetable oil consumption, and can therefore contribute to systemic inflammation, mitochondrial dysfunction and metabolic ill health.

“PUFAs act differently in our body,” Saladino says in the Rogan interview. “At the level of our mitochondria, it looks like this polyunsaturated fat, this linoleic acid-rich vegetable oil, is signaling things differently.

There’s a lot of compelling evidence to suggest linoleic acid is driving adipocyte hypertrophy — the fat cells are getting bigger. Fat cells can do two things. They can get bigger or they can divide. When fat cells get big, and don’t divide, they eventually start leaking inflammatory mediators.”

This doesn’t mean you cannot eat chicken or pork. However, unlike cows, buffalo and lambs, these animals have only one stomach and as such any omega-6 fats they eat are not metabolized and stored in their tissues. Since these animals, even healthy organically grown animals, are typically fed grains, they are loaded with omega-6 fats and may have 10 TIMES the LA content that beef, lamb or buffalo do.

That is why I think it is really a good strategy to avoid eating these meats and replace them with animals which have far lower LA content. If you want to know how much LA you are eating simply go to cronometer.com and carefully enter your food that is accurately weighed out and you can see precisely how much LA you are eating. It would be great to get your daily intake under 10 grams per day.

To recap, if you want to avoid dangerous fats of all kinds, your best bet is to significantly reduce or eliminate the following from your diet:

My comprehensive nutrition plan offers helpful guidance for this process. When cooking, coconut oil, butter, lard and ghee are healthy options. Also be sure to swap out margarines and vegetable oil spreads for organic butter, preferably made from raw grass fed milk. Butter is a healthy whole food that has received an unwarranted bad rap.

To further balance your omega-3 to omega-6 ratio you may also need a high-quality source of animal-based omega-3 fat, such as krill oil, if you’re not in the habit of eating small, fatty fish such as sardines, anchovies and mackerel, and/or wild caught Alaskan salmon.

3 thoughts on “The Case Against Processed Vegetable Oils”